Wild Hunt Column: The Dark of the Year By Sheri Barker

Although the wheel of the year has turned past the winter solstice, there are still long nights ahead before the seasons turn to a time when light and dark give the appearance of being more balanced. Many people find this to be a difficult time of year for a variety of reasons. Some are affected by the biological changes brought about by a reduction of exposure to sunlight, which can cause disruption of circadian rhythms and serotonin and melatonin levels. Others tune into the evolutionary survival trait of the fear of the unknown that made the dark a scary place and helped keep humans safe against predators that hunted in the night. And some, like me, feel discomfort from a place that elevates that survival trait beyond biology and into the realm of spirit. As a child, I was deeply afraid of the dark. The reasons for how that fear developed are long gone, banished to the dust pile where psychological debris goes to compost. I remember what the fear felt like, how it could paralyze my mind and body, and how certain I was that the dark housed monsters that were going to get me. I did not yet comprehend that sometimes the darkness is the monster. 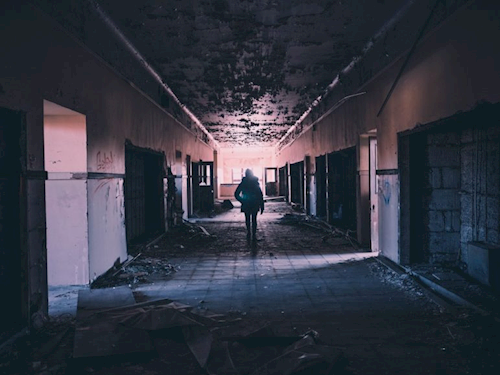 A shadowy figure walking through an abandoned hallway [Pixabay]

My mother used every parent’s sovereign specific in her attempts to ease my fear of the dark: a nightlight, which she plugged into an outlet in the hallway outside our bedrooms. This was somewhat helpful until the bulb burned out and there was no replacement on hand. My mother tucked me in, gave me some encouraging words, and left me on my own in the dark with only my little brothers across the hall. I remember being too frightened to move and too afraid to even close my eyes, thinking it would be better if I could see whatever monster was going to emerge from the dark. After several minutes of my eyes adjusting to the dark, I found a small amount of light was coming in through the window which looked out on a large commercial feed and coal storage yard beyond our fence line. After an inner battle to get out of bed and go to the window (the realm under the bed being fraught with danger), I ran the few steps across the floor and pulled the shade up to let the light into my room. A small half-circle of light filled the floor in front of the window, and I instinctively stayed inside that light. I was young enough that a nighttime landscape was new to me, and this one was lit by streetlamps spaced around the coal yard. Intrigued by this new way of seeing everyday objects, I took note of pallets full of farm and garden supplies turned into indistinguishable mounds of shadow, the pathways between them corridors of light fading to nothing, and the outbuildings at the edges of the light blended into the woods beyond. There was so much to process that I stood by the window until my toes felt icy cold.

Just as I was growing tired and contemplating the jumping distance to the bed, I saw something move in the coal yard. A shadow floated, rather than walked, from the outbuildings to the center of the yard. It did not change in form or substance as it moved, either in light or darkness. I knew this shadow was something that was wrong and ill-intentioned. I did not want to see it but could not stop watching. The moment it stopped moving, it turned in such a manner that I knew it was facing my house, and in the next moment, I sensed that not only was it looking at me, but it also knew that I had seen it. Without thinking, I stepped away from the window and out of the light. For the first time in my life, the darkness of my room was a safe haven. I was too afraid to return to the window to draw the shade down, but for once I felt able to move around in the dark. I did not turn the light on because I did not want the shadow to see me. In my first ever act of sympathetic magic, I quickly gathered the small army of stuffed animals and dolls who were my daytime friends and piled them on my bed before climbing back under the covers. Placing the animals in a circle around me, I spoke words to empower them to be my protectors from the shadow. Over many nights, they never once failed me.

For the rest of the time my family lived in that house, my connection to that shadow remained. I could sense its presence on the nights it moved through the coal yard. Sometimes I would sit by the window and watch it. Over time I learned to recognize the malevolence and dark energy that emanated from the being, and there were times I felt that presence in other areas in the neighborhood, especially along the old railroad tracks and in the woods where I was not supposed to play but did. I never told my parents about the shadow being. I suppose I thought they would not understand, or would tell me I was dreaming it up. So imagine my surprise when, as a teenager, my mother shared her own story of a daytime encounter with the being. After she told me she had seen it too, we talked about it off and on until her own spiritual journey made the subject taboo. 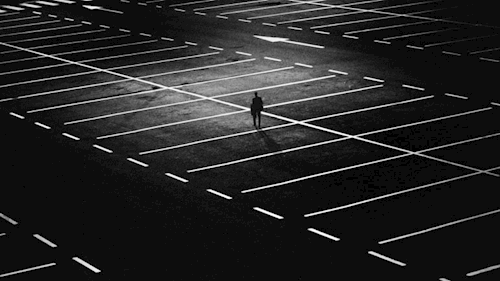 A shadowy figure standing in a parking lot at night [Pixabay]

In retrospect, I believe that my child self had an intuitive perception of a danger that I could not communicate to others. I lacked the familial, spiritual, and educational influences that would have given me the language and knowledge to move beyond perception and into understanding of what I was seeing. I had to rely on time and experience, and again, intuition. There have been many times in my life when I have seen and sensed that same malevolence. I would know it anywhere. I have sensed it in physical locations both with and without seeing a presence – in homes where there is paranormal activity, in buildings both new and old, and in wild places. I have also seen it and sensed it in the spiritual and physical space held by certain other human beings, and that is where it frightens me the most. I have seen the damage those humans cause. I have seen the energy of their auras with bites taken out of them, darkness where color should be.

I cannot give a name to the shadow being, but if I did know it, I would choose not to name it out loud. To me, it is only darkness. I do not know how that energy can become attached to or even consume a human being, whether by choice or accident. What I do know is that there is a difference between darkness as an absence of light and darkness as a malevolent presence. There may be monsters in the dark, but sometimes darkness itself is the monster. My experiences taught me well the importance of paying attention to instinct and intuition, and how important it is to listen to children, or to anyone, who says they are afraid but cannot articulate why. This time of year is meant to be a time for turning inward, for self-reflection and nurturing and quiet growth. I embrace that reason for the season, and the warm glow of candles and small lights serves as a reminder that the light will return. The days will grow longer, and balance will be restored. But during this time, I am also aware that darkness is a real thing itself, and that to continue to protect myself from it and from fear of it, I must maintain an understanding of what it is. My lights and candles serve another purpose, as a reminder that I have the magic and power to keep my fear of the dark at bay.

Now First Thurday of the month from