WILLMAR, Minn. – The leader of the Asatru Faith Assembly (AFA), Jason Plourde, was denied the restraining order he sought against Murdock Area Alliance Against Hate organizer Victoria Guillemard in the latest round of conflict created by the AFA purchasing and moving into a church that had been sitting empty in the town of Murdock, Minnesota.

Last Thursday, April 29, District Judge Stephanie Beckman ruled that Guillemard’s statements and actions did not constitute harassment since they fell under the right to exercise free speech over a public concern.

Plourde’s main complaints were that Guillemard was stalking and harassing him via social media using the Murdock Area Alliance Against Hate (MAAAH) group to do so, which was potentially harming his ability to earn income from his consulting business and was deterring efforts to recruit new members to AFA’s recently acquired property that have set up as a new hof in the town.

Judge Beckman pointedly noted in her decision on the issues of white supremacy that “…this Court is deaf to the political or moral ideology of AFA; rather, the issue before this Court is whether or not Petitioner has met the burden for harassment by law such that it requires this Court to issue a restraining order.”

The court found that there was no evidence to support Plourde’s claims that Guillemard had specifically targeted or harassed Plourde personally, but rather her efforts were focused on education and outreach, and not done with “the intent to cause safety, security or privacy issues.”

36. There are no reasonable grounds to believe that Respondent has engaged in harassment of Petitioner because the law allows her to exercise her right to freedom of speech about a matter public concern.

37. Petitioner was unable to meet the burden of proof required to establish Respondent engaged in harassing conduct or that her speech rises to the level of harassment.

38. Here, this Court finds there was no harassment because Respondent is engaged in education and outreach directed at the actions and speech of Petitioner and his group and not focused on him as a person as the focal point.

Judge Beckman included a warning in her ruling that while Guillemard could not be held accountable for the actions of everyone involved with MAAAH, the ruling could be adjusted to reflect new circumstances and that there were limits on what constitutes free speech.

However, this Court seeks for the communities to be warned that if others choose to increase conduct to cross boundaries or there is an infringement into any individuals rights to be free speak and/or be free harassment for his/her beliefs, a harassment restraining order may be issued under different circumstances or in different facts. All citizens need take heed that freedom of speech is not without limits and the law must be followed even when engaged in protest and outreach.

As reported by the Duluth News Tribune, Guillemard alleges that Plourde “filed this [petition] as an intimidation tactic.” Guillemard continued, “This was an attempt to silence me and keep me from using my First Amendment rights.”

Guillemard’s attorney, Brian Wojtalewicz said, “From the start, it struck us a misuse of the harassment restraining order.”

Both Guillemard and Plourde seemed satisfied with the ruling, though Plourde is quoted as saying, “Shame, it’s really just a big case of bullying and cancel culture going on.”

Plourde pointed out the final point made by the judge in her ruling, “that if others choose to increase conduct to cross boundaries” or “infringe on individual rights to be free to speak, a harassment restraining order could be issued under different circumstances or different facts.”

Guillemard, who is in law school and studying to become an attorney summed up her perspective of the ruling, “The lesson learned here is you have every right as a community member to call out things you see as a public concern, especially when it comes to racism and discrimination.” 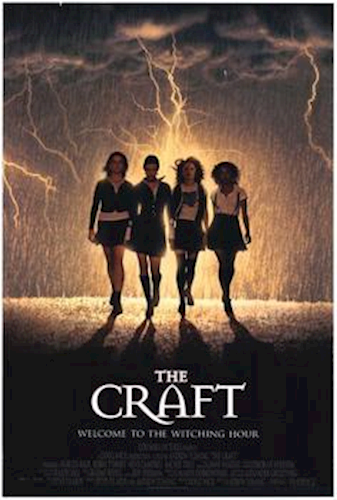 TWH – Today marks the 25th anniversary of the movie “The Craft,” which premiered in 1996 at number one at the box office with $6.7 million in revenue, and ended up being the 11th highest-grossing movie released about “witches” since 1980. It also helped to create a renaissance of renewed interest in Paganism, Witchcraft, and the occult.

The film was notable because the producers used an actual Witch as a consultant, Dianic Priestess Pat Devin, and the ritual scenes were created by drawing from Wiccan ritual practices.

Despite following all the guidelines in order to obtain a PG-13 rating, from the Motion Picture Association of America’s Classification and Rating Administration (CARA), the film instead received an R rating. CARA is comprised of an independent board of 8 to 13 members who “are chosen from U.S. society and must meet the qualifications of having a ‘parenthood experience’ and possessing an ‘intelligent maturity’.”

Director Andrew Flemming stated in the “The Craft’s” DVD commentary that he believed the R rating was due to the film featuring teenage girls using witchcraft.

Ultimately, the film’s rating did not deter young people from seeing it and it has since attained a level of cult following that few films ever reach.

The Craft’s popularity preceded other films and TV series, like “Charmed,” “Buffy the Vampire Slayer,” and “Practical Magic” all of which helped to draw a new generation into the exploration of magical practices and Witchcraft. “The Craft” holds a distinction as an important film milestone within modern Paganism and Witchcraft.

Today is World Press Freedom Day and there has never been a greater need for accurate reporting, independent journalists, and unbiased media. Just in the past year, 32 journalists were killed, with many more being unnecessarily injured and assaulted, and a record number imprisoned just for doing their jobs of reporting what was happening.

We stand in solidarity with the many journalists around the world who risk their lives to make sure that accurate information is reported.

Last week was the “pink” supermoon captured here as it rose over Buenos Aires, Argentina. The pink moon is called such because it coincides with the blooming of what is commonly called creeping phlox or moss phlox, a wildflower native to eastern North America, Phlox subulata. It has also been referred to as “moss pink.” A supermoon is defined as a full moon that coincides with the point in its elliptical orbit when it is closest to the Earth, also known as the moon’s perigee. This causes the moon to appear as much as 14% larger and 30% brighter than when it is farther from the Earth. It is important to note that “supermoon” is not a technical term used by astronomers, and there is debate over exactly how close the full moon phase and perigee occur for it to be considered a supermoon.