When hate comes to town, Pagans stand up to protest By Star Bustamonte

HURST, Texas – Some residents of the Dallas-Fort Worth suburban city in northwest Tarrant county came to the realization that a controversial church had moved into their town at some point during the pandemic.

The new resident is Stedfast Baptist Church (SBC) which had formerly been in nearby Sansom Park has been listed on the Southern Poverty Law’s Hatewatch list since 2014 for its promotion of anti-LGBTQ+ ideology. 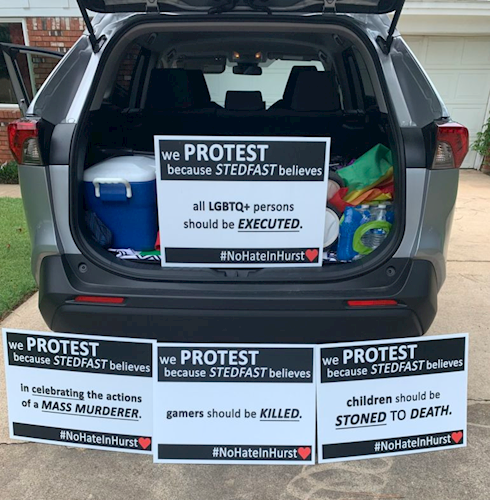 Beginning on June 27th an interfaith group, No Hate in Hurst, organized by Teri Pate began protesting the services held at SBC on Wednesdays and Sundays each week.

The SBC calls for homosexuals, those who practice Witchcraft, and a number of other acts the church views as sinful to be punished by death. The SBC is a branch of the New Independent Fundamental Baptist Movement (NIFBM) which was founded by Stephen Andersen. NIFBM adheres to an Old Testament Christian ideology and the 1611 King James Version of the bible.

NIFBM claims to be a revival of the 1940s Independent Fundamental Baptist Movement (IFBM) that sought to resurrect the fundamentalism of the 1920s. IFBM was composed of pastors who did not want to be beholden to any denomination so they could function autonomously and with no oversight. This enabled them to be self-appointed leaders with no accountability. The lack of oversight within IFBM churches reportedly eventually led to over 400 sexual misconduct allegations that spanned over 40 states and Canada and involved 187 churches according to the Fort Worth Star-Telegram.

It’s important to note that IFBM, NIFBM, and SBC have no affiliation with mainstream Baptist denominations.

While there have no reported allegations of sexual misconduct in connection with the NIFBM Stedfast Baptist Church in Fort Worth, their message of hate was enough to spur local residents into action.

Teri Pate, who is a retired pre-K teacher and identifies as an eclectic practitioner that blends Paganism and Christian ideology, posted about the SBC and some of the propaganda they were promoting in a community Facebook group created to engage the community and promote beautification and redevelopment of the south Hurst neighborhood.

Pate is the organizer of what has become an organic and grassroots protest against the messaging of hate by the SBC and started a private Facebook group, No Hate in Hurst, which currently has over 700 members.

She laughingly told TWH, “I have a new name these days, ‘Auntie Accidental Activist’.”

She said she posted in the community group that “maybe we should put on some rainbow clothes and stand on their [SBC’s] sidewalk.”

She was surprised by the responses she got and ended up inviting anyone who was interested to come to her house to make signs the day before the first protest on June 27, 2021. Then she realized she was not sure if she would need a permit or what the laws might be in Hurst, so she called the local police department to see what she needed to do.

Pate said the police were supportive of her intent to exercise her First Amendment rights. The police department official she spoke with provided information on parking and where it was legal to stand and advised her a permit was not required but requested she let the department know when the group would be protesting.

While only three people showed up at Pate’s house to make signs for their first protest, approximately 45 supporters showed up the next day on Sunday morning. Another 20 came back to protest the church’s evening service. Since then, the numbers have continued to grow.

Pate said she initially just planned to protest for 30 minutes at the beginning of each service on Sundays and then again on Wednesdays. But after the pastor, Jonathan Shelley of the SBC posted a message online about perseverance and how God favored those who do not give up, the protests ended up spanning several hours. 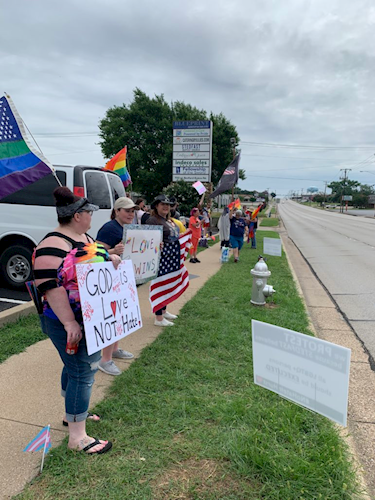 No Hate In Hurst protesters – Image courtesy of T. Pate

According to Pate, the protests have drawn a variety of members from the community, “It’s been the most amazing and beautiful experience. After the past 18 months – it is so beautiful to see all of these people come together for a common goal – pastors, LGBTQ+, grandmas, gamers, and Pagans.”

Pate described Hurst as largely white so the protests have not yet drawn as many ethnicities as she would like but she has been pleased with the growing response from the community. Last Sunday’s protest on July 4 between 60 to 70 people showed up.

Pate said, “[The protest] has taken on a life of its own that is just beautiful.” She also thinks people are just sick and tired of divisiveness.

Wyrd Dottir who identifies as a polytheist and Heathen said the community first got wind of the fact that SBC had moved to the area after the pastor made negative comments in connection with the accident that occurred at a Florida Gay Pride event last month.

She described the Hurst community she has been a part of since the late 80s, as being one where people do not just give lip service to important causes but are actually willing to stand up for them.

Wyrd Dottir said as a Heathen she definitely ascribes to the Havamal’s principle of “Where you recognize evil, speak out against it…”

She said the protests “have been good. Everyone who has been there has projected a peaceful and loving attitude.”

But she also worries about the influence the SBC has online and is concerned about safety since its not just the people who attend the church locally, and the church’s rhetoric advocating for the execution of members of the LGBTQ+ community, Witches, and anyone who does not adhere to SBC’s dogmatic ideology could have far-reaching impact.

“You never know when someone might decide to take matters into their own hands and act that messaging of hate,” Wyrd Dottir said.

Overall, she said that the police have been supportive, and other than the first protest when they stationed a patrol car in the parking lot of the strip mall where the SBC resides, they usually just do a couple of drive-bys and wave during the protests.

Nicole, who identifies as a Witch and whose practice spans several disciplines, first heard about the protest from Pate who is a neighbor.

Nicole said, “When I saw the pastor’s message of telling SBC members to ‘hunt down Witches and put bullets in their heads,’ I could not stay silent.”

Nicole has two children aged 12 and 14 and is married to a man of Native American heritage who identifies as an atheist. She said she gave her children the option of participating in the protest, but they felt it might lead to them being targeted for bullying. They chose to not attend. Nicole’s husband shows up to show his support for the LGBTQ+ community and the action being taken.

Nicole who has been a practitioner for three decades told TWH that her spiritual practice includes devotion to the Morrigan. She said that one of the aspects of being a devotee of the Morrigan, “is in picking up the sword, it means you also have to consider what to do after you win the war.”

Before the first protest, she asked for a sign of whether she should attend, and within minutes, three crows landed in her yard. She took that as a sign of affirmation to attend. She showed up with water to distribute amongst the protesters and helped to color a rainbow on the sidewalk.

Nicole believes very strongly that, as a magical practitioner, intent is everything. One of her principles is to leave things better than how she found them. This is also something she has taught her children and even a visit to a local park is accompanied by a trash pick-up as a devotional. 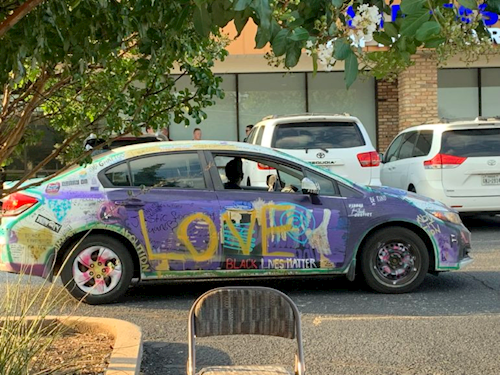 Car from the No Hate In Hurst protest – Image courtesy of T. Pate

Wyrd Dottir told TWH that her main goals in participating were to take a stand against hate, which she sees as a virus that cannot be allowed to fester and spread, and to let people LGBTQ+ folks and others know they are supported and that it was possible to build something strong within the community.

Wyrd Dottir also felt that it was important to raise awareness about the number of hate groups in various communities across the country. And while she does not necessarily think their protesting will change the hearts and minds of most of the members that attend the SBC, she does think that it could encourage new members to evaluate the messages being pushed by the church. She also thought of any child who might one day realize they are LGBTQ+ or Pagan, remember the signs of the protesters, and know they are supported.

Pate said that she intends to keep protesting until the SBC moves out of their town. Once SBC moves, they’ll consider future actions.

Wyrd Dottir said she was not sure what the future might hold if the No Hate in Hurst group manages to force the SBC out. “It could end up in a holding pattern and respond to future incidents of hate.” She considers the potential of the group as “beautiful.”

Nicole said, “I have a desire to see this through – how do we help people heal?”

She also said that as long as the SBC is in the area, even if they are forced to move from their current location, she will continue to protest them wherever they move. But she also is particularly concerned for the women involved with the SBC and would like to find a way to be able to offer them help if they want to break away.

As for an end goal, Nicole said, “I don’t know. I don’t want the people there to continue to practice hate. What’s the point of a war if it never ends?”

Nicole said she has also considered even reaching out to professionals that help people recover from leaving a cult. “Mental health help [for SBC members]. I’m not sure what the next steps are, but I am willing to take them.”